The cat insists that my chest is the warmest spot in the house at the moment so typing one-handed and only being able to see half the screen while breathing in cat hair and the smell of her latest victim is making progress a tad slow this morning. The thoughts for today’s pondering post came to me somewhere between midnight and that time in the morning where you might as well be on the moon for all the darkened silence that luxuriously surrounds you. The blearily noted brain farts that in the responsible light of morning look like chicken scratch scrawled haphazardly across a page in my bedside notebook, kept just for these types of occasions, form the basis for this post. The key drawback with this strategy is the fact that I kid myself that I will know exactly what I was on about but in reality I don’t have a cooking clue what my midnight ramblings were attempting to explain. All I have to work with this morning are heaps of connecting arrows, “Explore. Dream. Discover.” and “Here there be dragons”, which is heavily underlined leading to my conclusion that it was hugely important to me in my sleepy state for some yet to be discovered reason. While I am peering at the screen over my contentedly snoring cat, my brain backfires my train of thought from last night… I concluded my last post with “Explore. Dream. Discover.” and I thought I would share my reasons for using it and what this quote means to me.

The aforementioned excerpt wraps up the famous and well known quote:

“Twenty years from now you will be more disappointed by the things you didn’t do than by the ones you did do. So throw off the bowlines. Sail away from the safe harbor. Catch the trade winds in your sails. Explore. Dream. Discover.”

While its origins are fuzzy, being attributed to both Mark Twain and H. Jackson Brown, Jr., these three words are more of a life philosophy… three simple words that for me have a strong bearing on my life and how I live it. I was first introduced to it by a high school friend and it really struck a chord with me, echoing how I viewed the opportunities life bestows on a person. Life can be as exciting as one makes it, by grabbing opportunities and seeing where they might lead you. No experience is too small or too beneath you to consider, they will add substance to your character and even if it is not part of your ultimate path, it could be a stepping stone to greater things and at the very least a “remember when” story to tell around the braai. Which, aptly brings me to my second sleepily scribbled notion… “Here there be dragons”.

I quite like the idea that “Here there be dragons” was scrawled across ancient mariner’s maps as a warning of the unknown. Sadly this seems to be a bit of a myth, probably started by some pirates that had been happily caching their ill-gotten gains in those very spots or by “The World is flat” believers that didn’t want the rest of the population to find out that you won’t fall off the edge of the earth, thus revealing how ridiculous this concept actually is once you think about it. As part of my course criteria for the Zoology Honours Program, we were required to read a list of approximately fifteen books that contained content relevant to our various subjects. I started with a book that became alarmingly depressing as I progressed through it and the realisation spread, that the human race seems to be incapable of learning from its mistakes and is dead set on continuing the destructive vortex of decimating the earth’s natural resources. “The Unnatural History of the Sea”, written by Callum M. Roberts, outlines the history of aquatic resource utilisation and how efforts have intensified through the ages. I highly recommend it to anyone interested in our response to finite resources being used in an infinite manner… it played a part in turning me into a vegetarian, although at this point it is very much a farting-against-thunder attempt to minimise my detrimental impact on global resources.

But I digress, the reason I mentioned the book is because it includes many tales from the high seas as told by various pirates and naval ship captains and while reading it I was transported back in time to an era where discovery of new lands and associated weird and wonderful creatures was occurring on a regular basis. An era where it is entirely possible that sailors could have encountered “dragons” on their voyages across the vast expanses of our oceans with these unfathomable creatures becoming extinct before ever being documented. It is immensely saddening, and depending on the reason, hugely disgusting, that there are species that go extinct before ever being encountered by more than a handful of fortuitous individuals… sometimes even before they were ever known to have existed. While I was reading this book, I found myself wishing that I had been born in another time. Dreaming of a time where “explorer” and “discoverer” could legitimately be added to your CV and you could spend your time sailing the Seven Seas evading pirates and discovering new worlds or exploring vast jungles and discovering species. Granted I would probably have had no teeth, died of some exotic sounding disease at a rather young age and would really have preferred to have had proper toilets invented eons ago but wow… what a life that would have been!

Exploring the Seven Seas with Doritos to stave off seasickness

In my humble opinion; every era will have its drawbacks and it may even seem that all discoveries have already been discovered but I reckon that discovery is personal and relative, and experiences can be made truly awesome by appreciating the “small” things and making the most of every opportunity that life might chuck your way. Another way of looking at it is that even though discoveries in the natural world have slowed substantially, they are still happening on a regular basis but just in a different manner, such as on a molecular level, in the technological fields and in space. 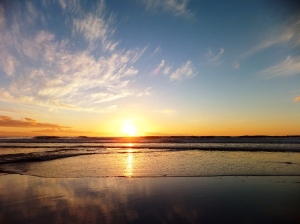